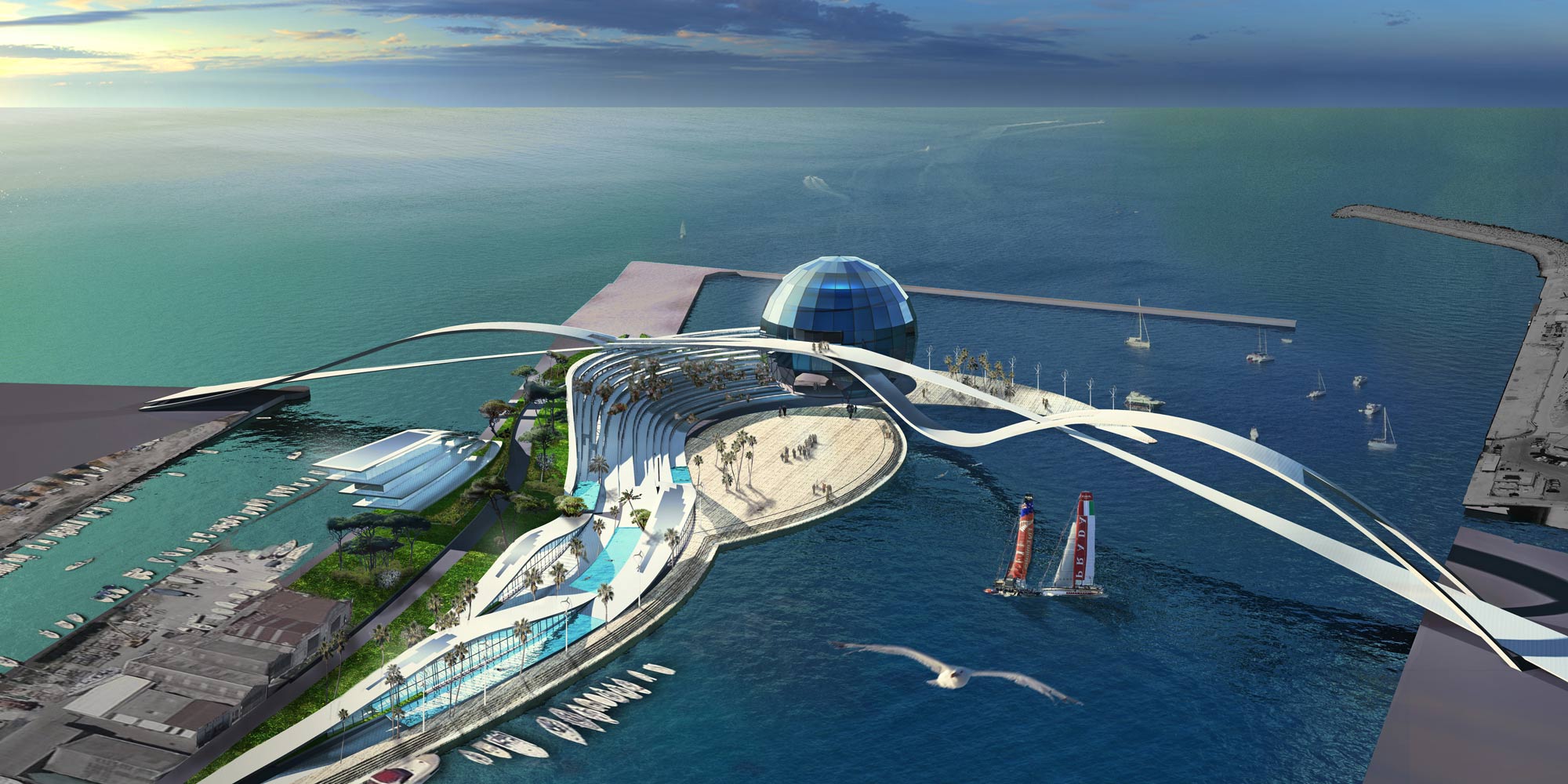 “Smart Harbour” was the first competition organized by YAC Young Architects Competition.
Pesaro has a high potential market not deeply expressed. The number of tourists in Pesaro, coming from north of Europe, could be increased along all the year. Pesaro is a beautiful city but with a citylife that needs to be improved and to be aligned to other Adriatic cities like Rimini, Riccione, Senigallia… and, even, making better.

So this was the enthusiasm and the intention of the project, thinking that if a design can inspire us, probably can also attract the citizens, costumers and tourists. More the idea like and more is secure the investment.

We did not win, despite all like it. Our victory and our defeat can be condensed to this comment “Very beautiful, but maybe too much for Pesaro”. 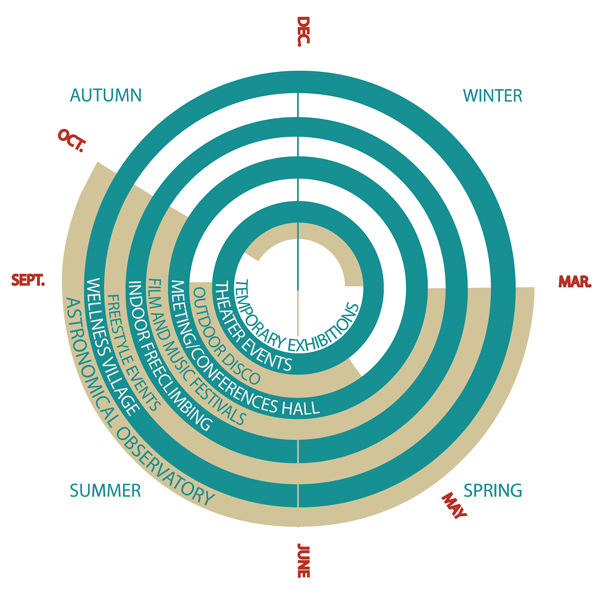 The needs of the project area is to give an identity to an urban void left by the former shipyard of Pesaro in a strip of land cut by the entrance to the harbor and the Foglia river.

Moreover is necessary a response to the lack of distinctive places and social meeting spaces in the Pesaro community. The project wants to convert the area in attraction point of the city through opportunities:

The project is not just an urban stitching with the present situation, it is also the completion element, thought to work synergistically with the future expected expansion of the boathouse designed by Marco Gaudenzi & Associates, if it will be realized.

The “Smart Harbour” project redefines the sedimented city – with its platform from the rigid lines – in a sinuous evolution of space, as a gradient, until to become a dynamic platform, a morphological adaptation to the natural elements. The Smart Harbour evokes the waves, where are placed seamless residences (4 floors for 1200sqm) , receptive buildings (Spa 400sqm, sailing school 500sqm, gym 600sqm) and between these, in the open spaces, “the wellness oasis” with green gardens (9800sqm) and pools (800sqm).

These built waves rise up and turn to the east, in this way we get two results, the first thing is to get additional indoor space of 1000sqm for indoor freeclimbing walls, restaurants, bars… and the second we obtain a cavea (open theater) of 5000sqm where can take place the most important events of Pesaro and of entire Marche as well.

But the “waves” are just the spatial matrix of the project, their generating, the origin of the whole project is the “Dome”, a sphere of photovoltaic glass, physical and symbolic beacon of the new port, designed to host exhibitions, conferences, festivals, international events of any type and capacity.

The choice of the spherical shape it seemed like a natural choice:

With all these formal and content suggestions we designed the Dome with a flexible covered square of 1400 sqm, an indoor theater of 1960 sqm with a suggestive view on the sea, then on top a lab / exhibition area with astronomical observatory of 1160 sqm.

All this has been enclosed as a double skin sphere, the inner structural and technological exterior with photovoltaic selective glass, shaped to accommodate LED lighting that also serve as a spherical monitor from exterior. Between the two skins, with this type of curtain wall we have allowed the natural ventilation of the entire structure and also – by inserting a helical ramp which runs around the entire surface of the sphere – we have allowed to go up all the levels, creating a suggestive promenade over the sea with thousands different views. 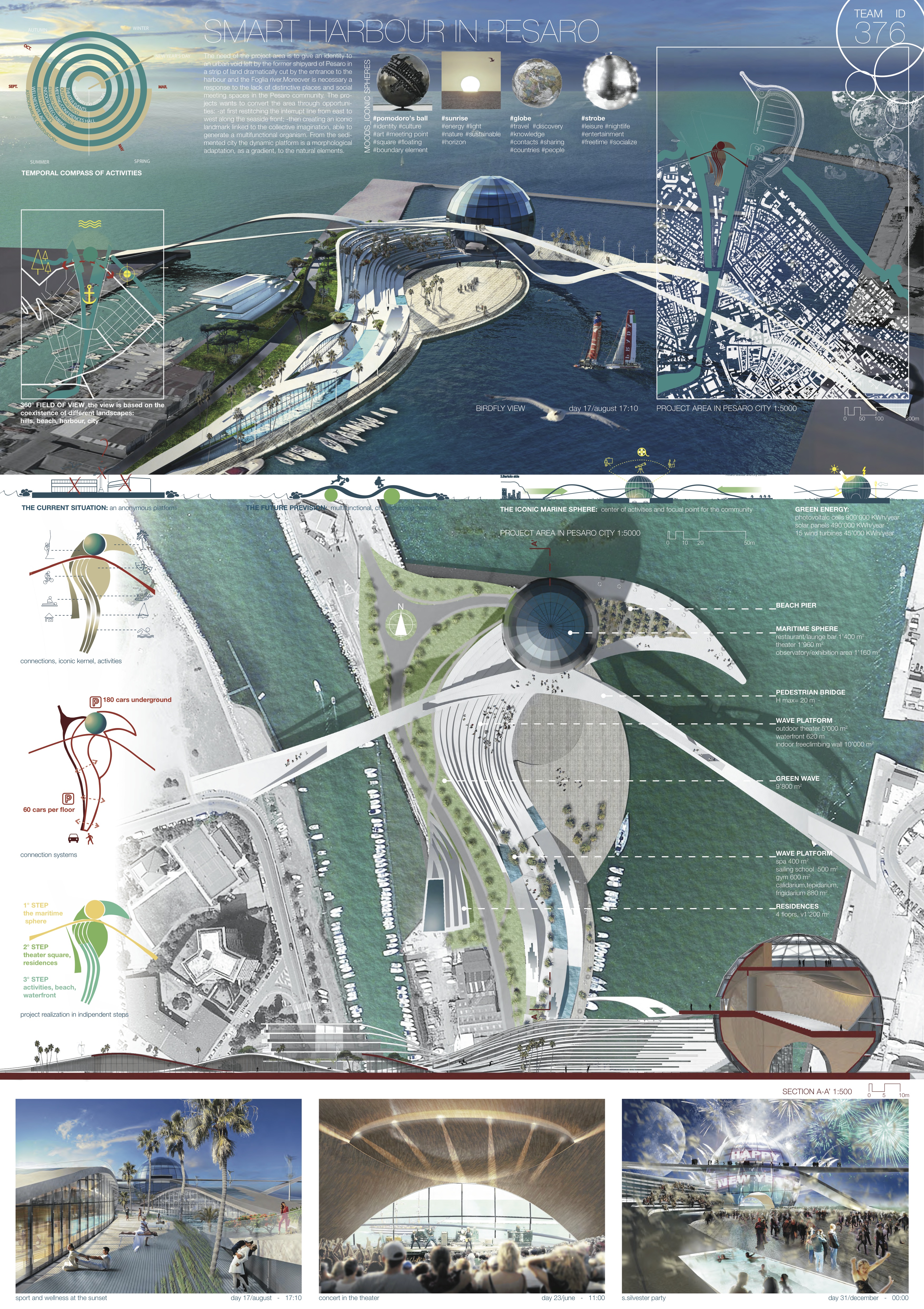